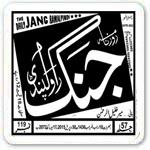 Claimant to the largest countrywide circulation, Daily Jang is one of the most revered Urdu newspapers of Pakistan. Founded in 1939, it is the oldest in the business. Its founder was Mir Khalil-ur-Rehman, a prominent name amongst the founding pantheons of the Fourth Pillar in Pakistan. Its Headquarter (HQ) is stationed in Karachi. The newspaper is a flagship publication of Jang group, a subsidiary of the Independent Media Corporation (IMC). With a firm belief in freedom of speech, the newspaper has often come under fire for its un-populist yet liberal weltanschauung on issues as ‘balanced relations with neighbors’, ‘Malala Episode’, ‘Judiciary ‘s eminent restoration’ – keeping its audience glued to its papers.

Remarkably, Jang Newspaper has long and still been the part of the Pakistani’s breakfasts for more than eight decades now. The paper has long influenced and guarded the national policy through its trailblazing columns. Notable columnists include the veterans like those of Ata-ul-Haq Qasmi, Maleeha Lodhi, Saleem Safi, Ajmal Khattak, Hasan Nisar, Munnu Bhai, Ikram Sehgal and many others. Appreciatively, the paper also welcomes and consolidates op-eds from political and social circles.

Trendingly, discerning the temper of the times, the paper timeously moved online with Jang Epaper accessible on ‘www.jang.com.pk’. The e-readers can also access there the Jang‘s Mag and Akhbar-e-Jehan – both weekly magazines, with the former a ‘family’ and the latter a ‘fashion’ magazine respectively. The two magazines are otherwise also available in printed form weekly to the Jang readers.

One of the edges the Roznama Jang has is a circulation from various cities of Pakistan, thereby, enriching an indigenous taste. A preferred voice of the academia, democrats and policy wonks since the very inception of country, Daily Jang has both enchanted and edified its readers remarkably. Despite an ever-raging inferno of hidebound censure, the paper stands dauntless – ever rising like a Phoenix ‘daily’.

The Jang Akhbar also has the privilege of continuous publication since its very inception. Despite a maverick approach to journalism, the newspaper has survived successfully the scathing lampoonery of caviling and eristic critics. The recent success includes the fashion magazine MAG, with a panoptic outlook of the rising and modernizing Pakistan.

During the turbulent Taliban regime in Afghanistan, the Jang Group of Newspapers had been at the forefront in seeking an audience with Osama Bin Laden (OBL). Thereby, the courageous journalists of the group set new standards in the arena of ‘embedded journalism’. Such struggle to quest for the truth is quite reminiscent of the newspaper‘s founder Mir Khalil ur Rehman, who in fact named the paper as Jang (war in English) at the outset of the World War Two. The name in actuality referred to a ‘war against war’.

Daily Jang Jobs is a section of the jang epaper which is very famous among its readers who either are looking for jobs or already employed people who want to switch to better or jobs having more salary. Jang Newspaper advertises tons of jobs daily and provides opportunity to the people and helps them in job hunt.

Jang Classified is a section of the jang epaper which is very famous among its readers who are interested in classified ads. Jang class ads is becoming more and more popular among it's readers.

All in all, Daily Jang is the gospel of those who search for veritable truth, no matter how dark, liberal, anti-status-quo or unpopulist – in an age beleaguered with warmongering, mudslinging, opportunism and yellow journalism. When Jang is read, a history of relentless struggle follows the reader in every single word that has the potential to inform, amuse, awaken and actuate.